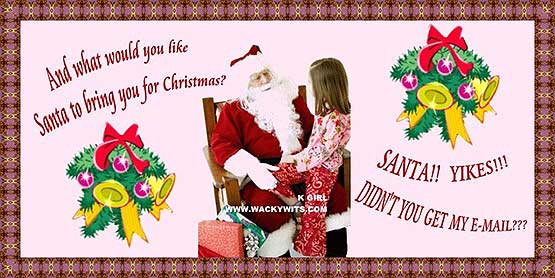 All I want for Christmas is thick hair and a thin body.

Please don't mix them up like you did last year.

1. Wears red.
2. Good at breaking into houses.
3. Has loads of electrical goods that nobody can trace.
4. Drives an unlicensed vehicle.
5. Only does one day's work a year.

Are you sure he's not a Scouser??


Husband turns to his wife and says...When I die I am going to leave everything to you......


Paddy says to Mick "The wife's just given birth to identical twins".

Paddy answers "Each other you daft bastard"!


A Friend of mine employed an Eastern European cleaner for his house. He was amazed when she took 8 hours to vacuum his home....

Turned out that she was a SLOVAC.


Man & wife are cooing over their new born baby.


Since it's snowed all my missus has done is look through the window!

If it gets any worse I'll have to let her in!!


I got run over by a Council Snow Plough this morning....


Quotes for Today:
Lost on the internet? You are Here -->


Lottery: A tax on people who are bad at math.


Love is a snowmobile racing across the tundra. Suddenly it flips over, pinning you underneath. At night the ice weasles come.