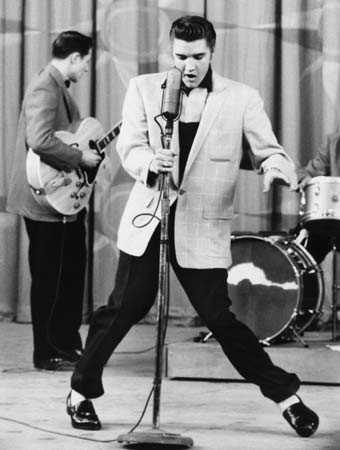 So a fat lady walks into a tattoo parlor. She tells the tattoo artist that she wants a portrait of Elvis Presley on her inner thigh. The tattoo artist is a little grossed out--he's thinking about how he's going to have to stencil on her blubbery thigh--but he's a professional, so he tells the fat lady to give him an hour to do some concept sketches. She comes back, and he sits her down. She drops her pants, and the tattoo artist starts drawing Elvis Presley on her inner thigh. He inks it in and asks the fat lady what she thinks.

The fat lady looks at the tattoo and says, "That's not Elvis Presley".

Fat lady says, "No. That's not Elvis. I'm not paying for that. In fact, I want you to do it again on my OTHER inner thigh. And this time get it right".

So the tattoo artist, he's like "whatever," and he wades into her blubber. He does Elvis again, and this time he makes sure the tattoo is extra-perfect. But again, the fat lady looks down and says, "That's not Elvis".

At this point, the tattoo artist is fed up, so he says, "Look. Here's what I'm going to do. I'll go out on the street and grab some random guy and bring him in here. I'll ask him to look at these tattoos. If the guy says they look like Elvis Presley, you have to pay for both. If he doesn't think they look like Elvis, they're on the house".

"Fine," the fat lady says. "They don't look like Elvis, so that's fine with me".

So the tattoo artist goes outside and grabs a drunken bum off the street. He drags the bum inside and says to him, "Look at those too tattoos. Do they not look like Elvis Presley"?

And the bum says, "Well I don't know about the twins on either side, but the guy in the middle kinda looks like Willy Nelson".

I am a nobody, and nobody is perfect; therefore I am perfect.


I am grateful that I am not as judgmental as all those censorious, self-righteous people around me.