Wednesday 20th October 2021 - 16:11:57
... over weapons ban (the funny side of real life)
A decommissioned Harrier jump jet has been removed from online auction website eBay after officials said it contravened their weapons sales policy.

Company director Chris Wilson said the jet could not be flown and was being sold for display use only. 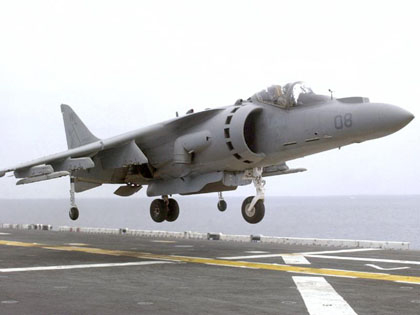 Mr Wilson, 33, of Leeds, said he had sold seven Harriers in the past to museums and collectors abroad and has all the necessary licences.

The jet was stripped of all its equipment and weaponry before it left the RAF, he said.

He added: "This is an obsolete item, just a museum exhibit.

"It's a perfectly legitimate item to sell. It's not capable of 'delivering weapons', it's not even capable of delivering a pizza.

"This is a piece of aviation heritage which needs to be preserved, and we need to be allowed to restore and sell it."

The Harrier, built in 1971, is one of only four of its kind left in the world.

An eBay spokesman said: "We have strict policies in regards to the sale of military weaponry, meaning the jet should not have been listed for sale.

"We would like to apologise to the seller concerned for the inconvenience this has caused him."


Quotes for Today:
Suicide is a permanent solution to a temporary problem.........

Take my hand and walk along with me, not ahead of me; otherwise I may not follow you.
Anonymous