The parents of a teenage girl decided to put their daughter's name forward for a surprise game show. She idolized teen-age pop star Ricky Martin, and they arranged for TV cameras to be placed throughout the house. The house was then left empty with Ricky Martin hidden in the wardrobe in the girl's bedroom - all set to give the daughter a wonderful surprise. 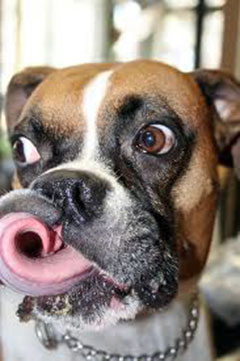 However, upon returning home from school and finding the house empty, the daughter made her way down to the kitchen where she opened the fridge and removed a tin of pate - at this stage the live TV audience is wondering, "What the hell is going on?"

She then went back upstairs to her bedroom where she proceeded to remove all her clothes and spread pate all over her triangle of womanhood (at this stage Ricky Martin is still hidden inside the wardrobe, and half of Spain is seeing a young girl stark naked on the bed with pate all over her crotch).

As if the parents were not shocked enough by this, the daughter then calls the family pet bull dog, who obediently trots up the stairs and settles down to his favorite meal of "pate on a bed of seaweed". At this stage the order is given to cut the broadcast, leaving a very embarrassed set of parents in front of a live studio audience! Consequently, sales of tinned pate have rocketed.


Quotes for Today:
Everyday I beat my own previous record for number of consecutive days I've stayed alive.


Fashion is all about eventually becoming naked.
Unknown


Freaking intolerant BS! (man does intolerance piss me off!)