TOUGH TO ARGUE WITH THIS ONE.

Indian Chief 'Two Eagles' was asked by a white government official, 'You have observed the white man for 90 years. You've seen his wars and his technological advances. You've seen his progress, and the damage he's done'.

The Chief nodded in agreement.

The official continued, 'Considering all these events, in your opinion, where did the white man go wrong?'

The Chief stared at the government official for over a minute and then calmly replied. 'When white man find land, Indians running it, no taxes, no debt, plenty buffalo, plenty beaver, clean water'.

Women did all the work, Medicine man free. Indian man spend all day hunting and fishing; all night having sex with wife.'

Then the chief leaned back and smiled. 'Only white man dumb enough to think he could improve system like that'. 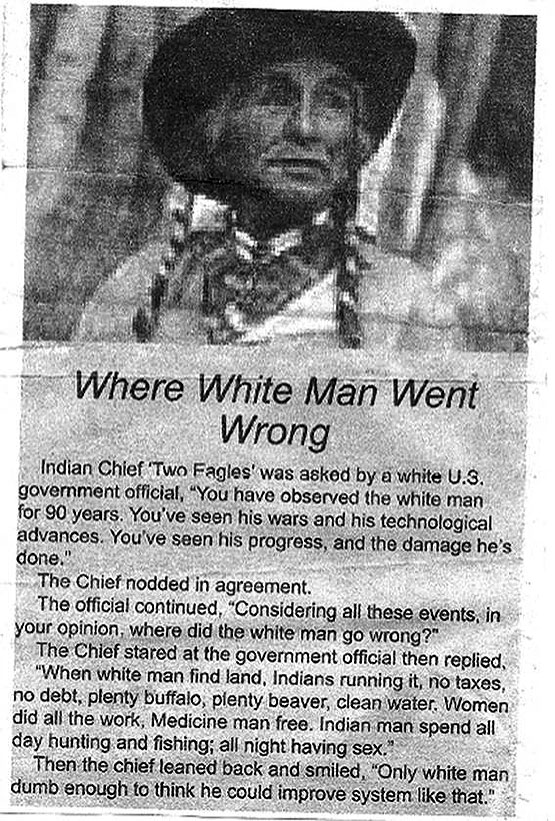 
Quotes for Today:
Did you ever stop to think, and forget to start again?
A. L. Milne (Winnie the Pooh)

Discipline is remembering what you want.
David Campbell

Do everything you can to be a happy person, right now. If you think you can grouse today and then be happy someday... in the future, I'm here to tell you that happiness just doesn't work that way. Putting off happiness until 'someday' lasts forever.