Thursday 30th June 2022 - 15:19:15
Once there were three little pigs who lived together in mutual respect and in harmony with their environment. Using materials that were indigenous to the area, they each built a beautiful house.

One pig built a house of straw, one a house of sticks, and one a house of dung, clay, and creeper vines shaped into bricks and baked in a small kiln fired from methane gas from his environmentally correct outhouse. When they were finished, the pigs were satisfied with their work and settled back to live in peace and self-determination. But their idyll was soon shattered.

One day, along came a big, bad wolf with expansionist ideas. He saw the pigs and grew very hungry in both a physical and ideological sense. When the pigs saw the wolf, they ran into the house of straw. The wolf ran up to the house and banged on the door, shouting, "Little pigs, little pigs, let me in!"

The pigs shouted back, "Your gunboat tactics hold no fear for pigs defending their homes and native culture!"

But the wolf wasn't to be denied what he thought was his manifest destiny. So he huffed and puffed and blew down the house of straw. The frightened pigs ran to the house of sticks, with the wolf in hot pursuit. Where the straw house had stood, other wolves bought up the land and started a banana plantation using petroleum-based fertilizers and pesticides which contaminate the groundwater. 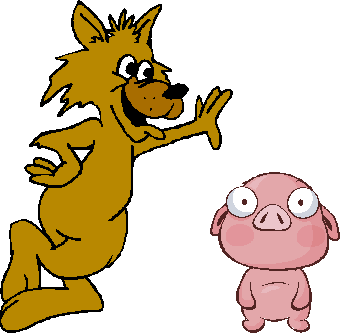 At the house of sticks, the wolf again banged on the door and shouted, "Little pigs, little pigs, let me in!"

The little pigs shouted back, "Go to Hell you carnivorous, imperialistic oppressor!"

At this the wolf huffed and puffed and blew down the house of sticks. The pigs ran to the house of bricks, with the wolf close at their heels. Where the house of sticks had stood, other wolves have now built a time-share condo resort complex for other vacationing wolves. Each unit was a fiberglass reconstruction of the house of sticks, as well as native curio shops, snorkeling and exploitative shows featuring dolphins captured from the wild.

At the house of bricks, the wolf again banged on the door and shouted, "Little pigs, little pigs, let me in!"

This time in response the little pigs sang songs of solidarity and wrote letters of protest to the United Nations. By now the wolf was getting angry at the pigs' refusal to see the situation from the carnivore point of view. So he huffed and puffed, then grabbed his chest and fell over dead of a massive heart attack brought on by eating too many fatty foods. The three little pigs rejoiced that justice had triumphed and did a little dance around the corpse of the wolf.

Their next step was to liberate their homeland. They gathered together a band of other pigs who had been forced off their lands. This new brigade of "porcinistas" attacked the resort complex with machine guns and rocket launchers and slaughtered the cruel wolf oppressors, sending a clear signal to the rest of the hemisphere not to meddle in their internal affairs.

Then the pigs set up a model socialist democracy with free education, universal health care, and affordable housing for everyone.

Author's note:
The wolf was a metaphorical construct. No actual wolf was harmed in the writing of this story.


Quotes for Today:
You can't get there from here.


Your failure to plan ahead does not make it my emergency!